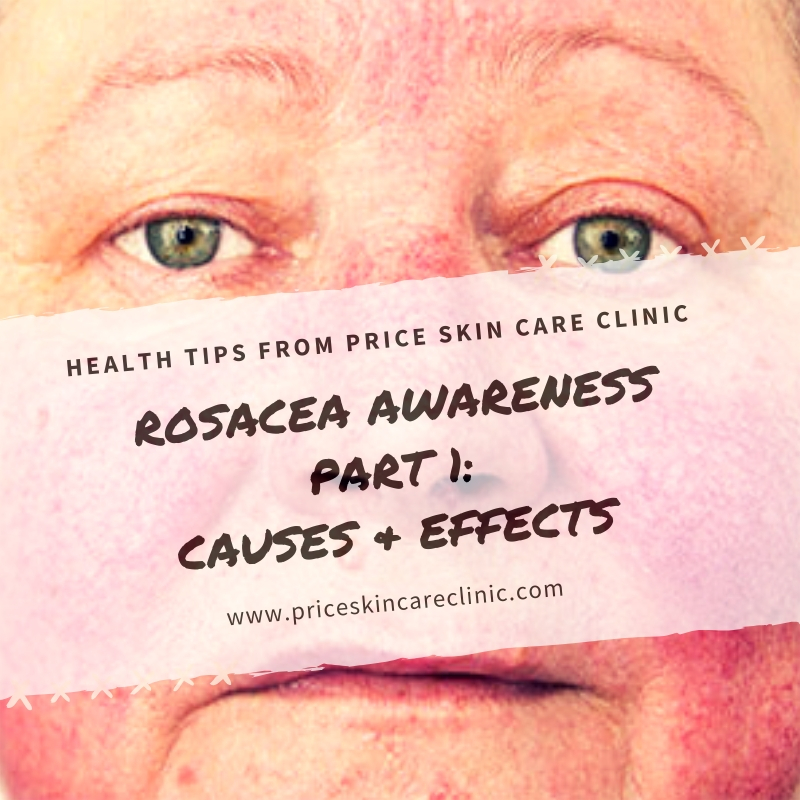 A common skin disease, rosacea often begins with a tendency to easily blush or flush. The distinctive redness of rosacea can spread from the nose and cheeks to the forehead and chin. It can even spread to the ears, chest and back.

“Unfortunately, the earliest symptoms of rosacea are often overlooked,” says Richard Price of Price Skin Care Clinic of Ridgeland, MS. “But it is important to diagnose and treat rosacea to keep symptoms from increasing in severity.”

The National Rosacea Society has designated the month of April as ‘Rosacea Awareness Month’ in order to:
• Educate the public on the disease
• Encourage those with rosacea to seek medical treatment before the disease gets worse
• And encourage greater public acceptance and understanding of the condition.

In Part 1 of this three-part Rosacea Awareness series, we’ll answer the questions:
• What Causes Rosacea?
• Who Gets Rosacea?
• How Does Rosacea Affect Quality of Life?

What Causes Rosacea?
Although scientists don’t yet understand what causes rosacea, they have found some critical clues:

• Rosacea runs in families, indicating that the condition may be genetic.
• The immune system may play a role in contracting the condition. Most who have acne-like rosacea react to a bacterium called ‘bacillu oleronius,’ which causes their immune system to overact. While scientists don’t yet know whether this is the cause of rosacea, it’s an interesting discovery.
• While not exclusive to those with rosacea, a bug called ‘H pylori’ which is known to cause intestinal infections, is often found in those with rosacea. Again, not proof of cause but a clue.
• Another clue is a mite, ‘demodex,’ that lives on human skin, especially in the area of the nose and cheeks, which is where rosacea often appears. Studies have found those who suffer from rosacea have large numbers of this mite on their skin. However, this clue isn’t definitive because there are those who do not have rosacea but also have large numbers of this mite on their skin.
• One last clue is, ‘cathelicidin’ a protein that normally protects the skin from infection, but can cause redness and swelling. Depening on how the body processes this proteicn may have something to do with whether or not a person gets rosacea.

Who Gets Rosacea?
According to the U.S. government, rosacea is a common condition, affectingmore than 14 million people in this country.

Most who get rosacea are:
• Between 30 and 50 years of age
• Fair-skinned, and often have blonde hair and blue eyes
• From Celtic or Scandinavian ancestry
• Likely to have someone in their family tree with rosacea or severe acne
• Likely to have had lots of acne — or acne cysts and/or nodules

It’s also known that:
• Women are somewhat more likely to get rosacea than men, but men tend to get the more severe forms of the condition.
• People of all races get rosacea.
• Children get rosacea.

How Does Rosacea Affect Quality of Life?
Rosacea is considered a chronic skin condition which means there’s no cure, only treatment for symptoms.

Surveys conducted by the National Rosacea Society found that the condition can affect quality of life by:

• Feelings of frustration and embarrassment: 41% of those surveyed said their Rosacea led them to avoid public contact or cancel social engagements.
• Low self-esteem: 70 percent of those living with rosacea said their condition lowered their self-confidence and self-esteem.
• Work-related problems: 70 percent say the disease affects their interactions at work. Nearly 30 percent say that rosacea causes them to miss work.

Other quality of life problems include heightened anxiety and depression due to the condition and worry that the condition will get worse, cause scars or side effects from medications used for treatment.

The good news is that treatment for rosacea seems to improve a person’s quality of life. Studies show that when those with rosacea present with fewer signs and symptoms, their quality of life improves.

In Summary
While rosacea remains a mysterious condition of unknown origin, it affects millions of Americans and can result in profound loss of quality of life issues. Fortunately, treatment provided by a trained physician can reduce the signs and symptoms and enhance quality of life for those who suffer from rosacea.

In Part 2 we’ll cover the signs and symptoms of the four subtypes of rosacea and treatment options for each.

Here Comes The Sun : Nine Ways You Can Protect Your Skin This Summer

Dr. Richard Price is board certified in Family Medicine. He has also completed a comprehensive…